Since THINK TANK (powered by Boost Oxygen) launched in 2019, it has become one of our most popular products. THINK TANK is 95% pure oxygen with organic Rosemary aromatherapy – our own nootropic product specifically made for all-natural and healthy cognitive support for memory and focus.

What is a “nootropic”? Definition: Nootropics are drugs, supplements, and other substances that may improve cognitive function, particularly executive functions, memory, creativity, or motivation, in healthy individuals. 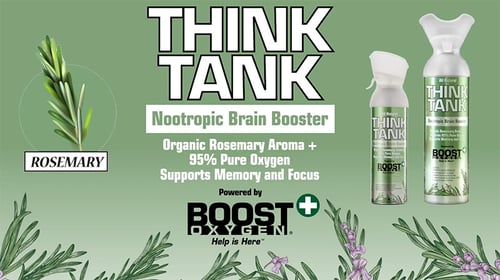 But THINK TANK is not a drug like Adderall or Ritalin (or worse). It’s not a multi- vitamin. It’s not caffeine or an energy drink loaded with sugar. THINK TANK is all-natural and healthy fuel for your brain – a brain refresher.

The air you normally breathe is ONLY 21% oxygen, with the majority being useless 78% nitrogen. Many people are surprised to learn that fact. Boost Oxygen products are lab-tested and certified 95% pure oxygen.

Independent studies have shown that increasing the oxygen level intake has benefits such as memory, focus and energy. Rosemary aroma has been independently studied and found to increase short term memory up to 75%. How? There are compounds in Rosemary oil that help with memory retention. This is nothing new – scholars in ancient Greece were known to wear wreaths of rosemary around their brow to improve recall while taking exams. Rosemary aroma is being increasingly researched and implemented with both the young and old, and its use as an all-natural, safe and drug-free cognitive supporter is becoming more accepted and widespread globally.

Think Tank is growing in popularity with business professionals

In any business, productivity is key to success. But in a world full of stress, lack of sleep, poor nutrition and overstimulation, sometimes it’s hard to keep focus and maintain productivity – especially if you’re working from home and juggling family life.

In the past, people relied on stimulants to keep focus – most notably coffee, sodas or energy drinks. But most people are now educated to the potentially harmful side effects these stimulants can have on your body. At the same time, many business professionals are now becoming increasingly aware of the benefits of pure supplemental oxygen for memory and focus.

It’s similar to the education process that made Gatorade a global brand in the 1980s. Before that, most people didn’t understand the benefits of electrolytes during hydration. As Gatorade became more widely accepted and used by athletes for recovery and performance, the public began to embrace the benefits.

Today, people are starting to learn about supplemental oxygen as an all-natural respiratory support for sports, high-altitude, areas with poor air quality and now in the workplace for focus and productivity.

The benefits of using THINK TANK for focus and productivity

The best part about using THINK TANK as a daily nootropic for greater productivity is that it’s completely safe and natural pure oxygen that has no side effects. Given that the brain uses 20% of the body's oxygen intake, it's important to keep this energy-demanding organ happy with sufficient energy for productivity!

During any workday, you’ve got to keep your mind sharp and focused during countless calls, meetings, problems and projects. It can be overwhelming for many people, especially in the corporate world. Most days it can feel like your brain has gone through a workout.

In addition to the benefits of Rosemary aroma that can increase short term memory up to 75%, there are other advantages of using THINK TANK. Even the most productive workers can occasionally experience low motivation. While poor mood and motivation can be attributed to many factors, nootropics can assist with fueling your mental drive.

Supplemental oxygen like THINK TANK can also help with stress, as pure oxygen is an all-natural respiratory support that can restore calm as part of relaxation and breathing techniques. People who practice yoga already know the benefits of proper breathing techniques for a calm and relaxed mindset and using supplemental oxygen can enhance that process.

Where can you get THINK TANK? At our online store or at select CVS pharmacy "Health Hub" locations nationwide!

Learn more about the benefits of using THINK TANK in the videos below: