During a health emergency, it’s common to see first responders and EMTs administering medical-grade oxygen to patients. Oxygen is essential for life. Your body uses oxygen to create energy, for brain health, to keep tissues and organs functioning properly, for metabolization and more.

Why First Responders and EMTs Administer Oxygen In An Emergency

Oxygen is one of the few things that a first responder or EMT can give to someone without knowing their medical history. No one is allergic to supplemental oxygen.

Administering emergency medical-grade oxygen increases the oxygen concentration in the lungs allowing more oxygen to be absorbed. This helps oxygen get to your lungs and heart, and other parts of your body. The extra oxygen can make you stronger and more alert. In emergency situations, increasing the oxygen concentration helps prevent brain damage, stabilizes the heart and other vital organs, and can even save a life.

First responders and EMTs provide oxygen for a number of reasons – if someone is struggling to breathe or breathing has slowed significantly, if their blood oxygen level is low (they will use a pulse oximeter to measure those levels), a respiratory emergency, if there’s been a fire or smoke inhalation, if they experience chest pain and many other reasons.

The air a person normally breathes contains approximately 21% oxygen. There can less at high-altitude locations like Colorado and the Rockies, where people commonly suffer from altitude sickness. The majority of the air you breathe is useless 78% nitrogen. The concentration of oxygen delivered to a victim through rescue breathing/CPR is around 17%. A condition known as hypoxia (insufficient oxygen to the body) can occur if a person goes without adequate oxygen for an extended period.

Watch this video about oxygen during an emergency from The Paramedic Coach, who provides valuable information for paramedics and EMTs on his YouTube channel:

Oxygen’s Role In The Human Body

Breathing is a natural human reflex. Air flows in via our mouth or nose and flows down the windpipe, which splits into two bronchi: one for each lung. Your lungs have tiny air sacs called alveoli that diffuse oxygen into blood cells. After absorbing oxygen, these blood cells leave the lungs and are carried to the heart. Oxygenated blood is pumped by your heart through your body’s cardiovascular network to tissues and organs.

Your body uses oxygen to create energy, for brain health, to keep tissues and organs functioning properly, for metabolization and more. Despite only being 2% of your total body weight, your brain takes 20% of all daily oxygen intake into the human body.

Boost Oxygen has teamed up with Chinook Medical Gear to provide portable 95% pure oxygen in their MyPak emergency medical aid kits. We had the honor to interview retired US Air Force Lt. General and former Surgeon General Paul K. Carlton, who is also on the Board of Advisors for Chinook.

Related: More on Boost Oxygen teaming up with Chinook Medical

“I have devoted my entire clinical career to preserving life and keeping people alive in difficult situations,” Carlton said. “With Boost Oxygen in Chinook’s Adult and Child MyPak, portable supplemental oxygen is now available during any emergency situation. In addition, Boost Oxygen should be placed in every first aid kit and resuscitation station in our country.”

Carlton also spoke about using Boost Oxygen as part of the evolution of CPR:

“I believe what will happen is that this will change our entire method of CPR,” Carlton said. “So that in the future when we start giving breaths again, the rescuer will take oxygen from Boost Oxygen, then breathe into the victim. So instead of breathing used air at 17% or 18%, what we expect is that exhaled air (oxygen) from the rescuer would be in the 40-50% range. So I think this has the potential to change the entire industry of resuscitative medicine and emergency medicine."

Boost Oxygen is portable 95% pure supplemental oxygen for all-natural respiratory support. No prescription is needed. Boost is not medical-grade oxygen (which is defined as 99.2% or higher pure oxygen) and it is not intended to treat or cure any illness. Boost is used by athletes for recovery, older adults for an active lifestyle, people at high altitudes for altitude acclimation and those experiencing poor air quality. Boost contains nearly 5x the oxygen you normally breathe and provides easy and immediate access to supplemental oxygen. 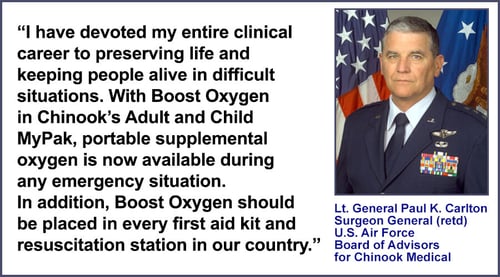