How It All Started: The Beginning of Boost Oxygen

In recent years, Boost Oxygen has experienced tremendous growth as consumers learn more about the health and wellness benefits of Supplemental Oxygen. The company has also received extensive media coverage thanks to our appearance on the hit ABC show “Shark Tank” during Season 11, Episode 2 in October 2019 and Season 12, Episode 23 in May 2021.

While some might think Boost Oxygen is new, the company has been operating since 2007 when Founder and CEO Rob Neuner launched the product. We recently sat down with Neuner to learn more about the start of Boost Oxygen and how he got the idea for his brand of portable supplemental oxygen. 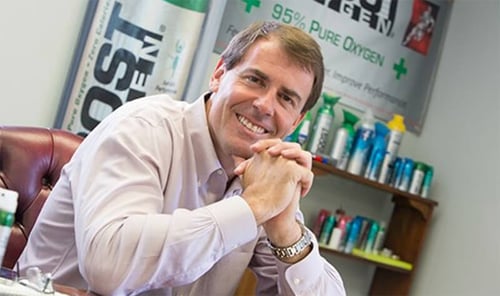 The Idea For Boost Oxygen

According to Neuner: “I used to do business in the Czech Republic - I imported beer from there. I sold the business back in 2007. One day, I was talking to a friend over there and I told him how I would see oxygen cans at stores and truck stops for hangover relief and keeping drivers alert on the road. Another friend mentioned using these cans in Germany for jet lag. It reminded me of when I played football in high school and college and there was supplemental breathing oxygen on the sidelines – and I always wondered why football players couldn’t get oxygen while they were on the playing field. I realized oxygen cans could solve that problem, so you would be able to bring a portable oxygen canister with you on the field. I decided to research the feasibility and one thing led to another."

The Launch Of Boost Oxygen

Neuner continues: "So, we launched it here in the United States and test-marketed it with some football teams - and the business started to ramp up. We sold it in Sports Authority, that was our biggest account. We discovered our biggest sales came from their stores in Colorado. So, we traveled to Colorado to meet with store managers and asked them why it was selling so well there. They told us it was because people there get altitude sickness and hypoxia due to the low oxygen levels at higher altitudes. From there, we made a major effort to maximize our efforts in Colorado. We’ve done a great job there, thanks to our amazing sales team in the state. Now, people in Colorado definitely know about Boost Oxygen. But the whole premise of Boost Oxygen is that it helps people with hypoxia, shortness of breath or are lower on oxygen, not just for high altitude.”

The Growth Of Boost Oxygen

While Boost Oxygen was popular in the Rocky Mountain region, Neuner knew that it could succeed nationally - but it needed the support of major retailers. That opportunity came in 2012 when Sports Authority agreed to carry Boost nationwide at its outlets. The Sports Authority distribution deal also helped legitimize Boost as a viable retail product, which led to future deals with retailers like CVS, Walgreens, Walmart and more.

The coming years saw exponential growth for Boost Oxygen:
- In 2019, a million-dollar deal with Kevin O'Leary on ABC's "Shark Tank" and Boost's biggest audience ever.
- An "online and digital pivot" for the company in 2020 with the launch of a Learning Center.
- More mainstream exposure as portable oxygen appeared on an episode of "The Simpsons".

Neuner went on to explain that as Boost Oxygen continues to grow in the years to come, it’s important to continue to educate consumers about the benefits of supplemental oxygen. In fact, it’s the same growth process another famous brand succeeded with.

“Before Boost Oxygen, portable canned oxygen was never heavily promoted in the United States. There wasn’t any competition for us. It was more of a process to educate the consumers. It was like when Gatorade first came out and they said electrolytes were important for hydration. People continued to use water to stay hydrated, but over time they understood the benefits of electrolytes. It’s the same concept here. People say that breathing regular air is just fine, but if you want to return to competition faster or feel better quicker, having supplemental pure oxygen is much better for you.”

And now you know how Boost Oxygen started!

We also invite readers to watch the below video of Neuner on the "Made In America" podcast where he goes into greater detail about the start of Boost Oxygen, major milestones along with way, stories about the business side of the company and more:

Related: A Brief (and Amazing) History Of Supplemental Oxygen

Related: Listen to Rob Neuner on the "Troublemakers" business podcast