Boost Oxygen, the global leader in portable oxygen canisters, is proud to announce the debut of “Boost Oxygen SPORT” – a new innovation specifically created and designed for athletes, fitness enthusiasts and active people of all ages. 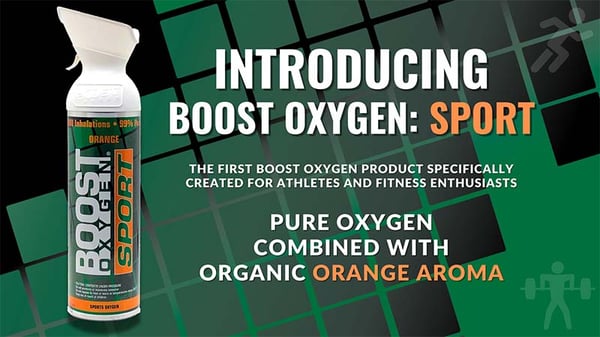 Boost Oxygen SPORT is the combination of oxygen and organic Orange aroma. Orange aroma (specifically Citrus Sinensis, which is the “sweet orange group”) has been independently studied and found to help exercise and performance. A 2016 study evaluated the effects of inhaled orange flower essential oil during exercise by student athletes. The researchers found that people who inhaled the oil had a significant improvement in running times as well as an increase in lung function.

Athletes have been using supplemental oxygen for decades for performance and recovery during workouts, training and competition. The average oxygen level in the air is 21% - the majority is 78% nitrogen.

“We are excited to make our new Boost SPORT canisters available to athletes and fitness enthusiasts everywhere,” said Rob Neuner, Boost Oxygen Founder and CEO. “Boost SPORT can be used by ALL athletes – from professional football players to college and high school athletes, as well as people simply going to the gym and working out. Boost Oxygen SPORT helps with performance and recovery for anyone who needs it during exercise, workouts aerobic activity or competition.”

The human body needs oxygen to create energy to power your tissues, organs, cells, and brain, which require even more during sports performance. Without enough oxygen, you can experience shortness of breath, lightheadedness, fatigue, and dizziness - especially during and following periods of strenuous or aerobic activity.

In addition, using supplemental oxygen can improve your VO2 Max, which can help optimize sports performance and reduce recovery time following athletic activity. VO2 Max is a measurement of the maximum rate at which oxygen can be effectively utilized during exercise by the body - specifically the heart, lungs, and muscles. It’s used to measure someone’s aerobic capacity.

Many athletes use portable oxygen on the sidelines to prepare their bodies for optimal performance on the field. Game day means an increase in breathing and heart rate, and higher oxygen needs. Providing the body with more oxygen allows for more energy and faster recuperation.

For runners and endurance athletes, inhalable oxygen can be used to maximize oxygen intake, avoid muscle cramps and possibly reduce risk for injury. When you inhale oxygen, it’s absorbed into your blood, where hemoglobin proteins in red blood cells carry it to your muscles and tissues. Increasing oxygen availability can improve this whole process.

ABOUT BOOST OXYGEN
As seen on Shark Tank – Boost Oxygen is the global leader in portable supplemental oxygen canisters. Based in Milford, Connecticut, Boost Oxygen is a Made in the USA product, available at retailers nationwide and exported worldwide to 50+ countries. For more information, images, and studies about the benefits of oxygen, visit BoostOxygen.com or their Learning Center at Learn.BoostOxygen.com. Follow Boost on social media: Facebook: @BoostOxygenUSA, Twitter: @BoostO2, Instagram @boostoxygen, LinkedIn: @boostoxygen and our YouTube Channel: Boost Oxygen

previous Can Too Much Supplemental Oxygen Have Side Effects? next Video: What If The World Lost Oxygen For Five Seconds?